July 7 — Well, today was the big shopping day. Di still wanted me to come along; she’d buy me dinner. Let’s see: long taxi ride, a couple of hours of watching Di and her sister shop, dinner, a long taxi ride . . . hmmm. No, I’m still staying at the villa.

Showed Trish how to fold and unfold Di’s Tzora battery-powered scooter. She and I did it together several times. This to enable Trish to unfold the scooter after leaving the taxi and how to fold it when they got back in.

The taxi arrived around 5 pm, and we loaded Di and the scooter without any problems. The girls were off and a glass of wine for me.

I went for a swim in the pool and read for a couple of hours. Feeling hungry I finished the bread and hard cheese and another glass of wine or two.

At around ten the girls returned, the same taxi having brought them back from Corfu city. Surprise — they hadn’t had dinner but had spent the entire time shopping. It turns out that my staying at the villa was the correct decision — I avoided four hours of following around two women shopping. Of course, they had to show me what they had purchased . . .

They had also stopped at a market on their return, so, fresh food.

Today, Dora came in to do some cleaning and replace a couple of burnt out light bulbs (she only had one spare of the right size here and will get another replacement next week).

Di and Trish also picked up a HDMI cable on their excursion, and we connected it to Trish’s computer and the LG TV this morning. Excellent picture from the PC but we were unable to get live free Wimbledon for Di to watch. Now, however, I can log into Netflix at any time for her to watch movies and videos as well as our iTunes movies on my Mac PowerBook. And, of course, there is always YouTube on either computer.

I finished another book on my computer today (Gust Front by John Ringo) and started Agent of Change by Miller and Lee both of which I’d read previously. I’m reading free on-line stories from Baen Books’ Free Library as I only have one more unread book remaining in my suitcase and Di’s remaining books do not appeal to me.

The book I finished reading yesterday, A Study in Sable by Mercedes Lackey, was quite good. Di loves Mercedes Lackey stories and this one showed up on our doorstep the day it came out — she saved, wonder of wonders, it for the trip rather than devouring it immediately.

It’s a fantasy “Sherlock Holmes, Doctor Watson” story with Holmes and Watson as minor characters. But part of the story occurs in the village/town of Sevenoaks in Kent southeast England. Di was raised in that area and we were married there. When I first visited England (December 1987- January 1988), her parents were living just a block and up a hill from the Sevenoaks train station. I spent many hours walking Sevenoaks’ streets and the grounds of Knole House during the three weeks I was there (wet and rainy as it was).

As an aside, I was teaching in Orange at the time and had two weeks off at Christmas. We needed an extra week. I requested an unpaid week off specifically so I could get married in England. The district refused. I took the week off. When I returned, I was informed that I was going to be docked a week’s pay because I took an unauthorized leave. Duhhhhhh . . . I mean get real folks . . .

On my To Be Read shelf:

Spheres of Influence by Ryk E.Spoor

Here I am on vacation again. I know some of you think this is a redundant statement as I have been retired some three years now, but it is not. There is something about being away from home that adds to the experience.

While reading today’s edition of the Grand Forks Herald, I came upon the following recipes:

Ah, well, time to take the wife shopping. will return in an hour or three. Will open a beer and resume reading one of my books–either Phoenix in Shadow by Ryk E. Spoor or Liaden Universe Constellation: Volume III by Sharon Lee.

Oh, yeah–here are Smoke and Mist, also on vacation. 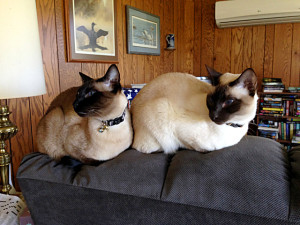 The above list is in reverse order of how I read them. It does not include the books I have re-read (including the Liaden series in preparation for Dragon in Exile, just out this last week). Between Goodreads and Amazon.com I’ve got a couple of hundred books on my recommended list, but I don’t have any of them here. Hmmmm . . . what to do? I think I’ll go through my wife’s three dozen or so books waiting to be read, and see if I can spot something I’d like to read–can’t sit around for seven weeks waiting for Constellation 3 to appear.