Leaving Corfu — July 2016 — Headed for England — British Airways lost one of Di’s suitcases — missing a bowl she bought on Corfu, the suitcase was brought to us a month later in California.

Time to take a swim before the day gets too hot to go out in the sun; after all, I’m not an Englishman.

Don and Kathy took the bus to Kassiopi; Becka walked to the harbor to do a little swimming in the bay (and maybe a bit of shopping); Di and her sisters are in and out of the pool and I’m reading the “local” papers online.

Being as this is our last full day at the villa, the sisters who own it came to say goodbye to Di, and the rest of us, this morning and brought her a few small gifts. They’re good people as Di has gotten to know them quite well through two years of email communications and frequent conversations while we’ve been here.

Dinner was a home-made affair of chicken, pasta and salad provided mostly by Trish and Helen.

Our last day, Friday, dawned just as beautiful, with promise to be hot, as most of those in the previous three weeks. I had my swim about nine and then went in to shower and finish packing. Di and her sisters swam later and sunned until after one in the afternoon. By that time I had most of Di’s stuff packed, including the items she’d purchased on Corfu for herself or for gifts.

Our taxi was late and arrived about two-fifteen. We loaded our belongings, Charlie’s scooter and ourselves and we were off. The drive to Corfu airport took about a half-hour.

At the airport we went to check in and all went fine until we came to Charlie’s scooter. First the security had me load it on the luggage belt to go through the scan — it wouldn’t fit. Later they decided that it had to have its battery attached — contrary to what had been AA and BA policy on our two flights previous. They had me wait in an out of the way area until the scooter was brought out from the luggage loading area.

Can you see me getting ticked off at both BA and Corfu security?

Then they came and got me and told I now had to go through security with the rest of my party, who had also been held up, and go to “6” just past Gate 5. (Gate 1 is where the rest of the passengers on our flight were to board.)

Di and I were hurried through security and to “6” at the end of the Departure level of the terminal. We were taken outside into the 90°+ heat of the day and I had to attach the battery to Di’s scooter. It was then wheeled off to be loaded onto our A320. The gentleman who had taken charge of us wanted Di and I to wait in the chairs there to be taken to the plane in about “5 minutes.”

NO, we were not going to wait in the heat and sun for him to return, so he reluctantly brought us back into the terminal with its minimal air conditioning. And, no, Di did not have time to shop in Duty Free. Yeah. Fifteen – twenty minutes later our guide returned to get us to the plane.

Now we were a bit ticked off but the next part was actually neat. Di was wheeled down a long ramp and to the back of rather large truck, but it wasn’t exactly a truck. The back end had a lift gate which we all got on and it lifted to the passenger area of the vehicle. The airport worker opened the door and pushed Charlie in. There was an identical door in the front to the right of the driver and another lift.

We drove to the front of the plane and parked just inches from the plane. The entire passenger section of our vehicle was then lifted to the level of the plane’s door and Charlie was wheeled forward. All she had to do was walk a step to the plane and then another fifteen feet or so to her seat in Aisle 1.

After we were seated the buses from the terminal carried the rest of the passengers out to be boarded. A weather delay over western Europe caused a half hour delay of our takeoff, but the plane was cool and it wasn’t a problem.

The flight itself was smooth; the Jack Daniels plentiful and the prawn dinner tasty. We had a twenty-five minute wait until a wheelchair arrived to take Di into the terminal at Heathrow. A longish walk and a two-stop tram ride brought us to the baggage area . . . Problem. 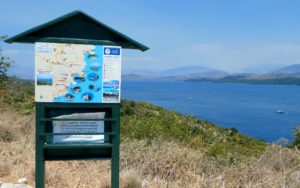 Morning came and I had my swim. Trish, Helen and I — Becka volunteered to keep an eye on Di for the afternoon — got in the car for a scenic drive to the north. The road got wide enough at one point for there to have been painted two white lines down its center, although the lines were so faint they looked as though they had been painted about the time Charlie and I were married.

Beautiful scenery, beautiful villas and pebbly beaches. We stopped in Agios Stefanos for a dip in the sea, at least Helen and Trish did. We then had a drink at The Wave taverna on the beach — I had another Corfu Red Ale and the girls had virgin umbrella drinks and split a wicked looking ice cream and crepe mid-day dessert.

Then to the shopping at a couple of the usual souvenir shops. Postcards, stamps, some clothes and for me two sets of “hand-made” glass Greek coasters, one for Mike and one for myself. The woman in the shop (Delfini Traditional Crafts) gift wrapped both sets in the same paper so I don’t know which is which; guess I’ll find out when Mike chooses his.

One of the problems I have when going into these types of emporia is that I still think like a woodshop teacher and look for things I could have had my students make back in the day. Yeah, I once again found items I’d not seen before — dirty word, dirty word, dirty word.

On the way back to the villa Helen saw an unattached trailer by the side of the road built by the company of a Welshman she knows. (Ifor Williams Trailers LTD) She insisted we stop and we pulled into a turnout; Helen literally hopped out with her camera and walked back to the trailer to snap a picture. She hurried back to the car — I snapped a couple of pictures of her hurrying around the bend — chortle.

Also, we came upon a working garbage truck and crew emptying bins by the side of the road — It appears to me at least, as though they are still catching up to some of the refuse left over from the strike they were engaged in when we arrive in Corfu two and a half weeks ago. A quick stop at the “super” market and we were home.

After seven we again headed down to the harbor to catch a boat (think water taxi) to a cove north of us and dinner. We were landed at the White House Taverna for dinner. Di had difficulty navigating the steps and ramps to our table overlooking the water, but we made it. They had given us the table with the longest walk, not seeming to notice that Di’s a bit disabled. (If you come to Corfu, remember these people have nothing like the ADA to help the physically challenged more easily cope with life.)

The house was originally built by Gerald Durrell‘s brother Lawrence, which disappointed Di as it wasn’t the house the family had had in the 1930s. It also did not have many pictures nor much memorabilia, nor did the staff know much about the family’s circumstances or other houses on the island.

Service was a bit slow, but we enjoyed our food. Di was a bit disappointed as her salmon filet turned out to be a bony salmon steak a bit overdone to her taste. One sister gave her some of her lamb, again a bit done for Di’s taste. My meal, however, was quite good — the White House version of seafood pasta — although someone needs to teach the chef how to de-vein prawns as I had to complete the job for him on the plate. (In addition when the waiter took away my empty plate of befores, a pair of very good Greek sausages, he also took away my silverware. It was a few minutes while my dinner was cooling before I could get his attention for a replacement set — I really didn’t want to eat my seafood pasta with only my fingers.)

There was only one toilet for this, large, restaurant and it was a long walk and up steps for Di. She was quite weak after navigating between tables without her wheelie and we seated her nearer to the dock to wait for our taxi rather than return to our table.

The full moon was up; the breeze was cool and the ride back was a highlight of our stay in Corfu. The trip was a bit longer on the return as we also picked up and dropped off another family on the way. Nissaki harbor was cool and we were soon back in our villa. Trish and Helen returned the rental car and the girls, Di, Helen, Trish and Becka played several games of Bananagrams. We didn’t get to bed until one-thirty Thursday morning — it’s now ten.