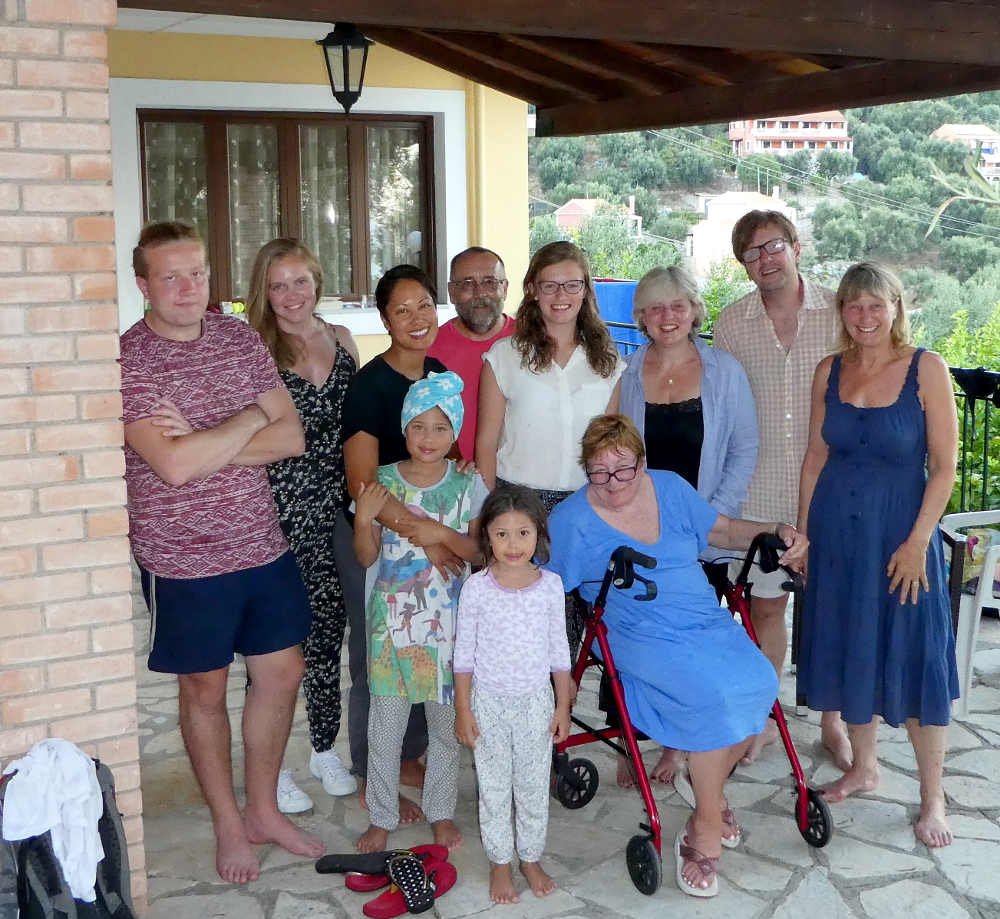 The following day David rented a small boat to take his family, Helen and her daughters on outing up the coast. They were gone for most of the afternoon and returned early in the evening — the little girls tired and worn out. Helen, Eleanor and Holly were picked up by George, the taxi driver, a bit after eight for their ride to the airport and flight back to England. Helen will return in a few days with her son, Theo (her husband, Richard, is in Africa on business and cannot make it).

We’re all going to Mitsos Taverna for dinner at seven tonight — I’m quite looking forward to it: SEAFOOD.

Tomorrow afternoon, Kathy Hunsberger and her husband, Don, are arriving. Di’s schedule shows them staying for a week and flying back to London with us when our stay here on Corfu is over. And, yes, we will be going places with them in Oxford and London before returning to the US on the third of next month.

Dinner at the taverna was quite good — including the pizza and pasta for the two girls. I had the same octopus and seafood plate I’d had the previous time while Di and Trish had something different.

Kit, Cara and Lola went swimming. (Cara forgot to bring her swimsuit so Trish bought her a tee in the gift shop across the street — that and her knickers served her well.)

Well, tomorrow arrived and so did a text message from Kathy. Their plane was delayed for three hours in New York, so they missed their connecting flight at Heathrow for Corfu.

I got up about eight and Dora was already cleaning the outside. I got Charlie up and went swimming. Before getting into the pool I took a shower but the water wasn’t running. Dora saw me (it was the outdoor shower for before and after swimming) and said that the water supply for the neighborhood was off — delayed maintenance delayed too long and something broke. Before I could say anything else she told me not to worry as there was a storage tank under the villa — good for a month of water for our use. It’s half full and will last our stay even if repairs on the neighborhood system are not quickly forthcoming.

BA was going to put Don and Kathy up overnight and on the Saturday flight for Corfu — but the Saturday plane for Corfu was already booked full. So . . . they were flown to Athens where they got a flight to Corfu and arrived here at the villa about eleven-thirty.

After getting them settled, we talked on the patio for about an hour and went to bed. Kathy and Don, who were not sleepy owing to their mussed up day, stayed up as we retired.