The picture above shows the Villa Andonis as seen from Nissaki Harbor.

Sunday — a nice quiet morning. Trish went to the market and got a few things for lunch and dinner — this included another bottle of wine (yeah, Tricia and I basically split a liter and a half bottle of semi-sweet red wine everyday between us — and at €5.65 per bottle it was almost very good) and a loaf of fresh bread. I went down to the small harbor and scouted it out in preparation for sailing to dinner next week when the other part of Di’s family arrives.

The only real problem lies in Di’s difficulty walking. The little harbor is up and down and the flat area is a bit narrow and not quite level enough for her scooter. We’ll have to use her wheelie and have her walk up and down a half-dozen steps to get to where the boat ties up. 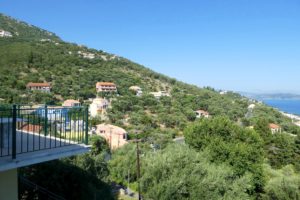 One of the owners visited in the late morning and it turns out that a relative of hers owns the restaurant we’ll be sailing to, so we’ll get help for Di when we arrive.

Also, unfortunately, the narrow winding roads through this area are too steep for Di’s scooter. This means that she’ll spend most of her time here at the villa. She and Trish spoke with the owner today about being able to do some shopping in the town of Corfu and were given some directions and tips about places, times and taxis. Gee, it looks, so far, like I won’t have to go shopping with them (hope, hope, hope).

Lunch was a fresh salad with ham and salami and wine. Trish did a load of laundry and I did a small fix on the dishwasher.

The days have all been in the 80s and 90s but there is usually a breeze and our bedrooms are air-conditioned. In the shade it is comfortable. Time to go down to the pool and have a brief swim before a(nother) glass of wine.

July 4th passed without incident and without fireworks — just another Monday here.

July 5th — I got up about 7 am and Di and Trish about an hour later. After Di had taken her meds and said she was OK, Trish and I walked down the hill for food, water, wine and newspapers. (Because Corfu is a favorite holiday destination for the British, all but one of the English language newspapers available here are British. The exception is the International New York Times. I’ve read a lot about Brexit and the changes in the British government since the vote.) We got most of our stuff at the further market, including two 6-packs of 1.5 liter bottles of water, still and carbonated — total weight about 40 pounds. I carried the water and she the rest.

The nearer market was a walk of 150 – 200 yards and as we arrived Trish says something like: “Oh, Joe, I’m sorry. We could have gotten the water here instead of you carrying it all the way.”

Anyway, she got the last of the groceries, and we trudged up the hill to our villa.

The only negative note for the day was a small plastic part breaking on the toilet in Trish’s room. I was able to fix it. “Should” cost the owner about €0.50 to replace, but . . .