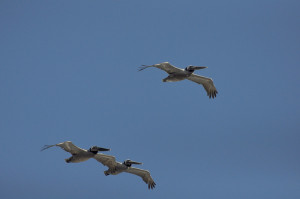 One of the nice things about living near and being able to walk at the beach is the variety of sights.

There are almost always surfers to see. In southern California we also have school surfing teams. Some mornings you can see the middle school and high school teams practicing at the city or state beaches. After practice a quick shower, and, at least for the middle schoolers, a trip in mom or dad’s car home or to school. There are completion meets between schools and overall regional meets sanctioned by the NSSA – National Scholastic Surfing Association. Football, baseball, field hockey and surfing, ahh, southern California. 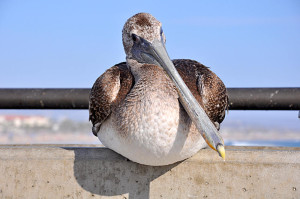 There are also plenty of critters who like to live at the coast. We have a large number of squirrels in addition to the pelicans and other birds. Several times a week you can see dolphins and seals from the cliffs and pier, and, occasionally, a whale. 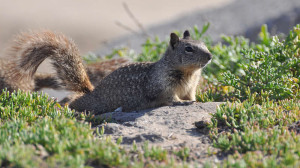 People watching is a constant. Twice in the last few years 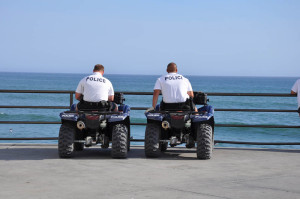 I’ve been passed by Orange County Sheriff training platoons jogging to a military cadence. We have beach police on their ATVs and people looking for the space shuttle. Out to sea the Coast Guard practices for ocean rescues. 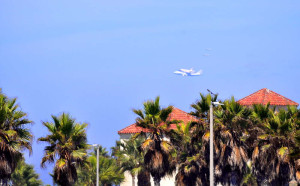 I’ve almost always got my camera slung over my shoulder on my walks. Some days I take scores of pictures, hoping that a few are worth saving and some days the camera never leaves my shoulder.

When I began walking on the beach in the 70s, after moving to Orange County, I’d carry my Pentax Spotmatic, take pictures and hope some of them would be good enough to enlarge. Film and developing were expensive for a beginning teacher. Thanks to the advent of digital technology, I no longer have to limit my picture taking. A 16 gigabyte card holds a couple of thousand pictures and I can do my processing on the computer; I can crop and adjust color to my heart’s content and then have only those I like printed.

I import the pictures I like into an album in iPhoto and, through iTunes, show them on the television in our living room when I play my music. When we have guests and sit in the living room we don’t have a large blank TV screen in the room, we have our family pictures quietly appearing and disappearing in the background – better atmosphere than a black screen or football game.