One of the nice things about being retired is that I usually have quite a bit of time to read: newspapers and books, primarily.

Unfortunately, my favorite authors seldom write more than a book or two every year or two (or three or four). This means I re-read a number of books every year as well as find new authors to read. It also means that I sometimes am “inundated” with several new books at about the same time — publishers do not go over their schedules with me before releasing their books.

I received my copy of Peter F. Hamilton’s new Commonwealth novel — A Night Without Stars — last Tuesday and dove right in. By Friday I was on page 264 and Ian W. Toll’s The Conquering Tide (in paperback) arrived. The Conquering Tide is the second in Toll’s trilogy of the Pacific war. At 542 pages, not counting Notes and Index, it was a good quick read. Yes, I finished it today while sitting on our exercise bike and watching parts of Day of the Jackal on the room’s Apple TV.

By the way, I give The Conquering Tide 5 Stars.

Now I can resume reading A Night Without Stars and Spoor’s Spheres of Influence. And tomorrow my copy of Flint’s Castaway Odyssey should arrive — even though I saw it already on the shelves of HB’s B&N last Saturday.

Next week Modesitt’s Treachery’s Tools should also be delivered to my front door. I have several other books on order that should be arriving in the next month and a half . . . ahhhhhhh. Now, if I could just get an advance copy of The Gathering Edge before Christmas . . . 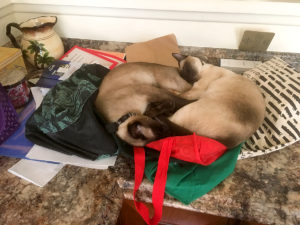 Many who worked with Nimitz later recalled his shrewd use of the well-applied joke. While winding down a testy planning session in the spring of 1944, the admiral said he was reminded of history’s “first amphibious operation,” conducted by Noah. “When they were unloading from the Ark, he saw a pair of cats come out followed by six kittens. ‘What’s this?’ he asked. ‘Ha, ha,’ said the tabby cat, ‘and all the time you thought we were fighting.'”

Oh yeah, I went to our new Senior Center last Friday to get my annual flu shot and made the “mistake” of stopping at the library and getting a new card. Found a copy of Sue Grafton’s X. Now I just have to find time to read it. Hmmmmm . . . such a problem.

July 7 — Well, today was the big shopping day. Di still wanted me to come along; she’d buy me dinner. Let’s see: long taxi ride, a couple of hours of watching Di and her sister shop, dinner, a long taxi ride . . . hmmm. No, I’m still staying at the villa.

Showed Trish how to fold and unfold Di’s Tzora battery-powered scooter. She and I did it together several times. This to enable Trish to unfold the scooter after leaving the taxi and how to fold it when they got back in.

The taxi arrived around 5 pm, and we loaded Di and the scooter without any problems. The girls were off and a glass of wine for me.

I went for a swim in the pool and read for a couple of hours. Feeling hungry I finished the bread and hard cheese and another glass of wine or two.

At around ten the girls returned, the same taxi having brought them back from Corfu city. Surprise — they hadn’t had dinner but had spent the entire time shopping. It turns out that my staying at the villa was the correct decision — I avoided four hours of following around two women shopping. Of course, they had to show me what they had purchased . . .

They had also stopped at a market on their return, so, fresh food.

Today, Dora came in to do some cleaning and replace a couple of burnt out light bulbs (she only had one spare of the right size here and will get another replacement next week).

Di and Trish also picked up a HDMI cable on their excursion, and we connected it to Trish’s computer and the LG TV this morning. Excellent picture from the PC but we were unable to get live free Wimbledon for Di to watch. Now, however, I can log into Netflix at any time for her to watch movies and videos as well as our iTunes movies on my Mac PowerBook. And, of course, there is always YouTube on either computer.

I finished another book on my computer today (Gust Front by John Ringo) and started Agent of Change by Miller and Lee both of which I’d read previously. I’m reading free on-line stories from Baen Books’ Free Library as I only have one more unread book remaining in my suitcase and Di’s remaining books do not appeal to me.

The book I finished reading yesterday, A Study in Sable by Mercedes Lackey, was quite good. Di loves Mercedes Lackey stories and this one showed up on our doorstep the day it came out — she saved, wonder of wonders, it for the trip rather than devouring it immediately.

It’s a fantasy “Sherlock Holmes, Doctor Watson” story with Holmes and Watson as minor characters. But part of the story occurs in the village/town of Sevenoaks in Kent southeast England. Di was raised in that area and we were married there. When I first visited England (December 1987- January 1988), her parents were living just a block and up a hill from the Sevenoaks train station. I spent many hours walking Sevenoaks’ streets and the grounds of Knole House during the three weeks I was there (wet and rainy as it was).

As an aside, I was teaching in Orange at the time and had two weeks off at Christmas. We needed an extra week. I requested an unpaid week off specifically so I could get married in England. The district refused. I took the week off. When I returned, I was informed that I was going to be docked a week’s pay because I took an unauthorized leave. Duhhhhhh . . . I mean get real folks . . .

On my To Be Read shelf:

Spheres of Influence by Ryk E.Spoor

After Di’s dental appointment Thursday, we stopped off at Barnes & Noble, Bella Terra. This is always chancy owing to our tendency to buy “too many” books. Luck was with us as I found an open Handicapped Parking space so she wouldn’t have to walk too far (or drop her off at the B&N and use the parking structure).

We spent a good hour+ in the store, mostly in the science-fiction/fantasy section. We filled one basket, a bit over-filled actually. I got three books: Steadfast (Jack Campbell), Shadow of Freedom (David Weber) and The Wright Brothers (David McCullough).

I know this is a bit ridiculous as I’m already in the midst of reading three other books. But what the heck, I’ve also re-read all but one of the Liaden books–in the last ten weeks–in preparation for getting my copy of Dragon in Exile (in the next week or so, I hope). She also received a package from Amazon UK this week. This brings Di’s current backlog of unread books to about two dozen. She’s saving some of them for our vacation trip this summer.

$12.00. I just finished Chapter #3 and am finding it to be a good read. Well written with plenty of the details we never learned in school–pitch a tent on the sand, dig your own well, heat and mosquitoes–“in the form of mighty cloud, almost darkening the sun.” (p. 58)

It is not a quick read, and I’ll probably finish one or two of the others before I finish The Wright Brothers.

I’ve got the “boob tube” on in the background with the Indy 500 and the Angel-Red Sox game. I find I really don’t care who wins the race, but, hey, it’s the Indy 500. The Angels are trailing 3 to 1 in the 6th inning–Go Angels! Mist is sleeping in my lap, and I hear the Sunday LA Times crossword puzzle calling my name.

Remember the real what, who and why for this holiday weekend. To my Uncles Andy, Billy and Charlie (US Army and Air Corps), to my cousin Christian (US Navy), to my brother John (US Air Force), to my mother Gladys (US Navy Waves), to my father-in-law Ferrier (RAF) and to all of the rest of you who have served and are serving, thank you.